The Museum of Bad Judgement

An Ongoing Series of Paintings

The ideas for the paintings in this series grew from a memoir written by Bruce Spaulding (my grandfather) in 1983, entitled Some Interesting Criminal Cases I Have Tried. He died in 1990, and I discovered this unpublished memoir many years later. He was an attorney in several towns in Oregon starting in 1930. His memoir covers eight murder cases between the 1930’s and 1960’s.

​Click here to read an exerpt from the memoir.

His writing about these cases and the people and circumstances involved is unusually visual and detailed. In addition to the memoir, I have several of the case files, as well as newspaper clippings and other ephemera related to the cases. These stories and the pieces of evidence evoke vivid images for me that I am using as source materials for this series of paintings. I am not painting or recreating murder scenes, but instead drawing on my own visions of the people, places and things surrounding these stories.

Some of the larger themes I am exploring are turning points and decisions, memory and loss. My grandfather began losing his memory to dementia shortly after he wrote down these stories, and most of the people involved, I assume, are dead.

To start the series I had to narrow my focus, so I could concentrate on my approach to each painting, otherwise I knew I would be all over the place. I decided to pick four cases, and paint 3 paintings per case. (One large, and two smaller) Reining myself in helped me concentrate, and really connect deeply with what was going on in each painting. ​ 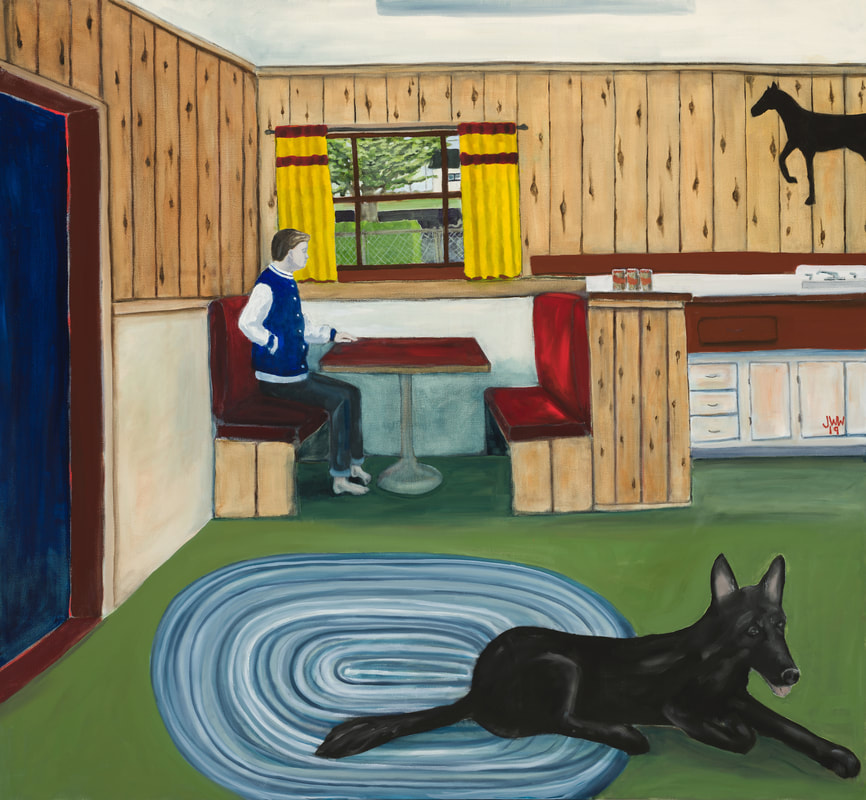 Sherwood High; Oil on Canvas 52" x 50"; Case: State vs. Rossa
These are brief summaries of the four cases that I am currently working with. I'm not sure if knowing about these cases add to the experience of seeing these paintings, because they definitely stand on their own. Also, there is so much more to these stories than I am sharing here, but these are the basic facts.

State vs. Richard Layton
(This case took place in 1943, when my grandfather was the District Attorney in Polk County, OR. He was the prosecutor in this case. I recently went to the Polk County Courthouse in Dallas, Oregon, and I imagine it is much the same as it was back when he tried this case.) Richard Layton was the chief of police of Monmoth, OR, and was accused of raping and murdering a girl named Ruth Hildebrand in 1943. My grandfather won a conviction in this case, and Layton was later executed.

State vs. Marjorie Smith.
In 1955, Kermit Smith was murdered when his car exploded in the parking lot of the Columbia Edgewater Country Club in Portland. My grandfather defended his wife, Marjorie Smith, who was  accused of hiring a man to place dynamite in his car. It was a sensational case, and was followed by national press. My grandfather won an acquittal for Marjorie smith. Click here to hear a recording of Bruce Spaulding talking about this case.

State vs. Vera Rossa
Vera Rossa was accused of murdering her husband by poisoning him in 1965.  The couple were in a terrible car accident on the road between The Dalles to Portland, when Arthur Rossa had a heart attack and lost control of the car.  He died that day, and the DA accused Vera Rossa of staging the accident to hide the fact that she had poisoned her husband. My grandfather defended her, and she was acquitted as well.

State vs. Robert Sproul
This case took place in the John Day country in Central Oregon in 1958.Robert “Bobby” Sproul was on trial for shooting his brother-in-law, Link Williams,  in a stand-off over a property line between their two farms. My grandfather defended Bobby and he was acquitted. It was also a very sensational case and was treated like an old fashioned, western “high-noon” shoot-out by the national press. 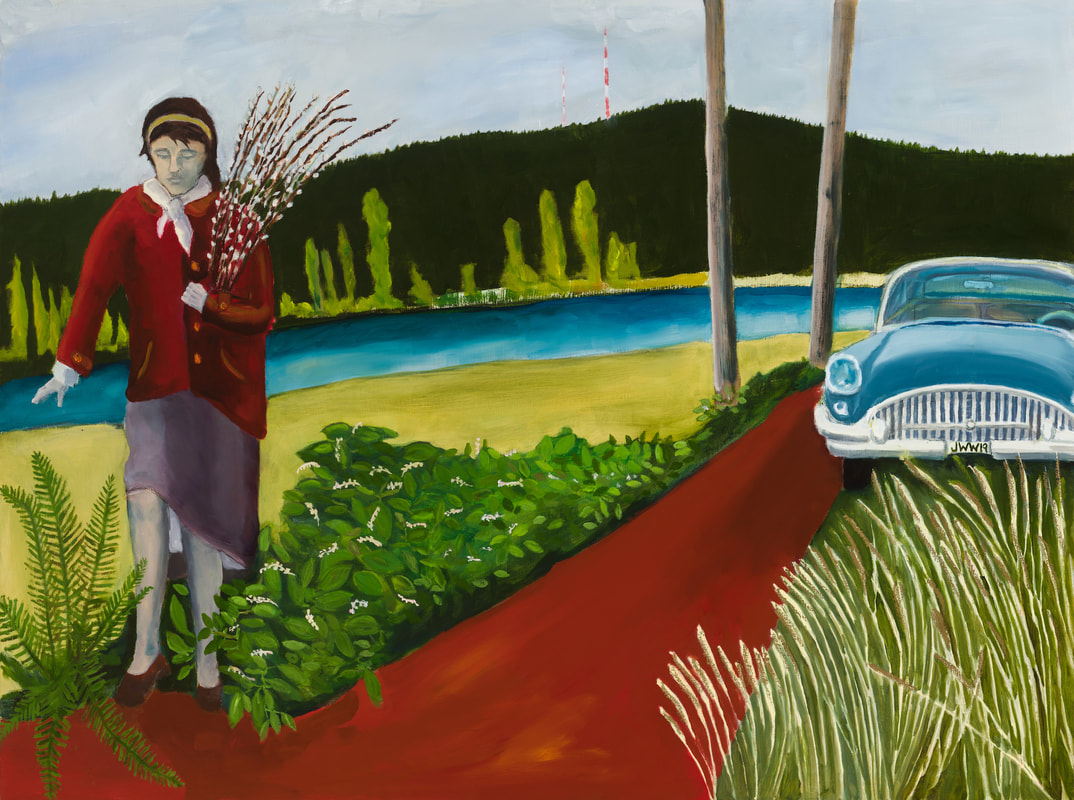 Ridgefield; Oil on Board; 32" x 40"; Case: State vs. Smith
As I work on the paintings in this series, my imagination moves to the people involved and what they were going through, the houses and buildings -  the smaller parts of the stories. In a way, I am inviting these long dead characters, into the very current, living world of my paintings. It’s a series about connecting my imagination to real evidence and true stories.

Why Bad Judgement? Because that is the common thread that runs through all these particular stories, and so many others. Realizing this has opened me up creatively as this project has evolved. To me, my Museum of Bad Judgement is about these stories of murder, denial and mistakes from the last century, but everyone has their own thoughts about what their Museum of Bad Judgement could be. I hope it helps people let their curiosity lead them as they experience these strange paintings.

I see the Museum of Bad Judgement as an evolving idea. Right now it is an ongoing series of paintings. I am hoping to show all these paintings together at some point in the future, when the pandemic is over. I am hoping to share these stories in more detail and connect with people through painting, writing, and in other ways that I can't identify yet. Maybe it will be an actual space in the future, so stay tuned. 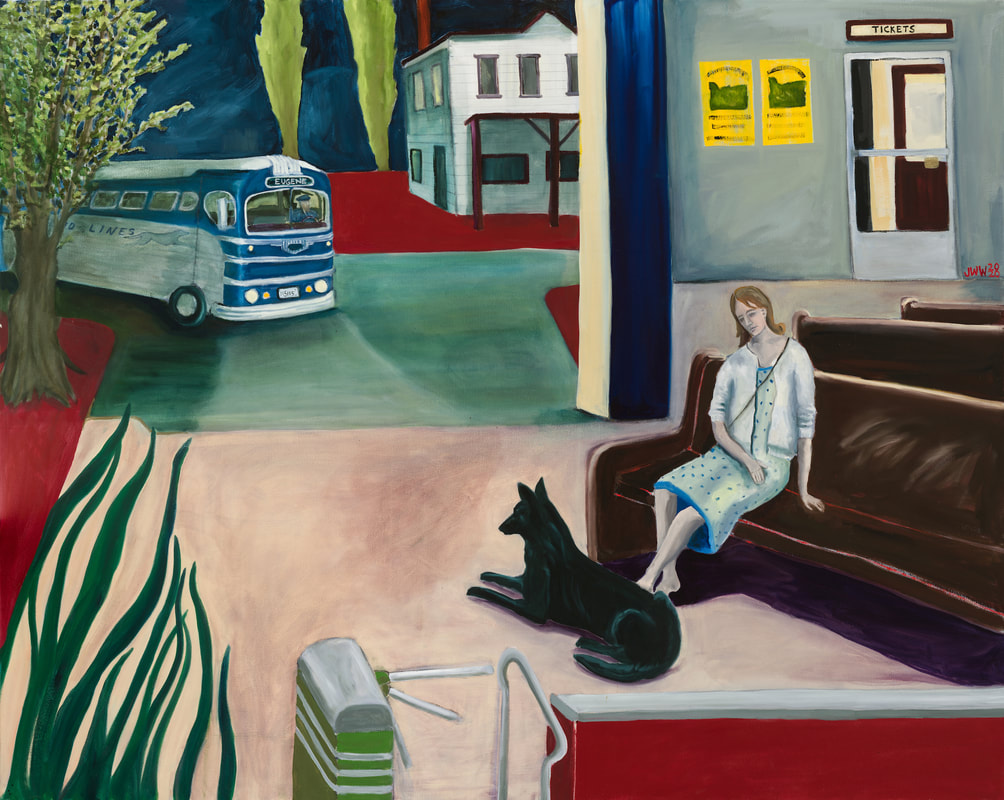 A Short But Important Journey; Oil on Canvas 60" x 48"; Case - State vs. Layton
Please feel free to contact me, if you are interested in seeing more of these paintings, or if you have any questions or comments about the project. Most of these paintings are for sale. You can find them and others in my online store, here. 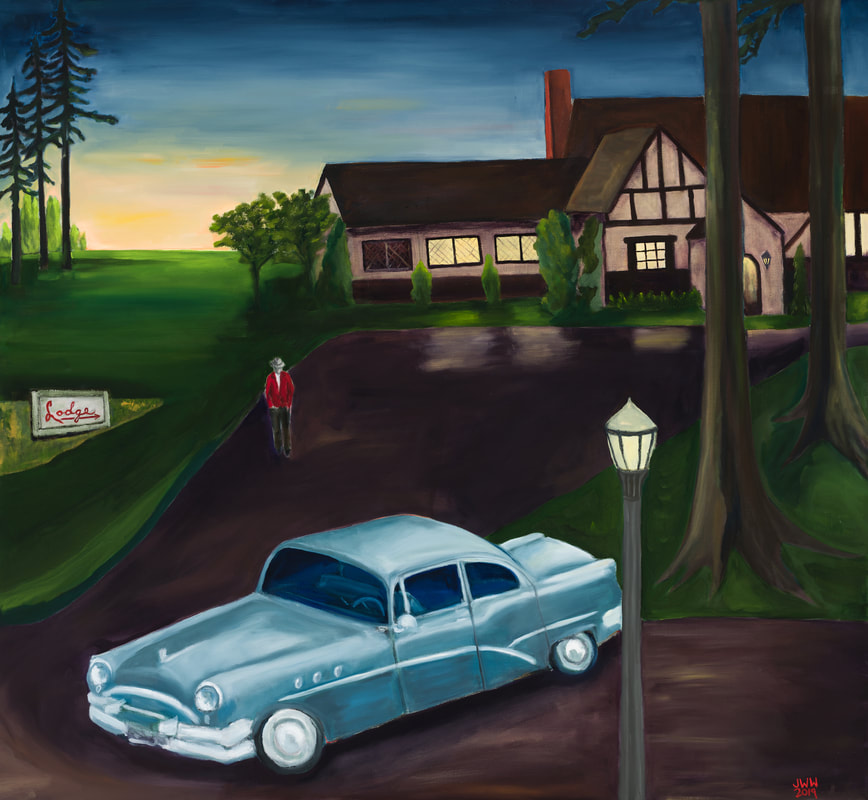 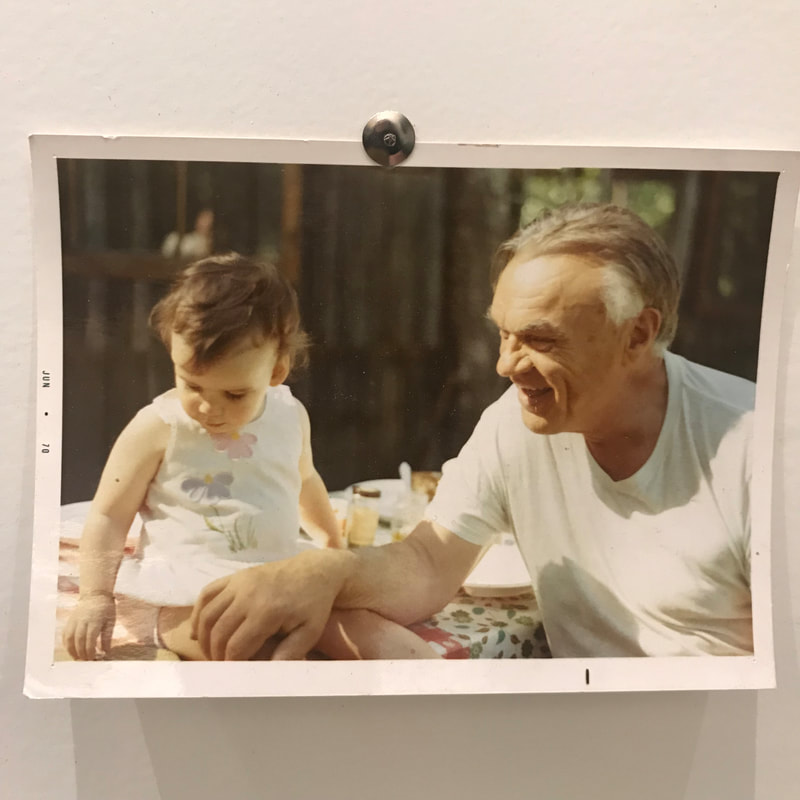 A short film about the Museum of Bad Judgement